together with Raffaele Cioffi 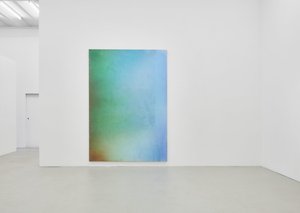 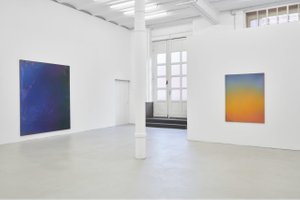 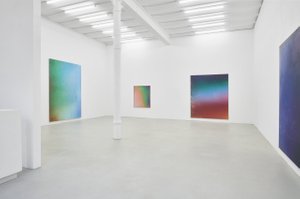 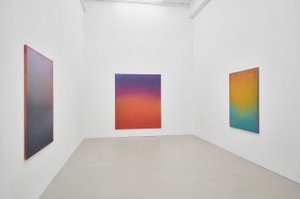 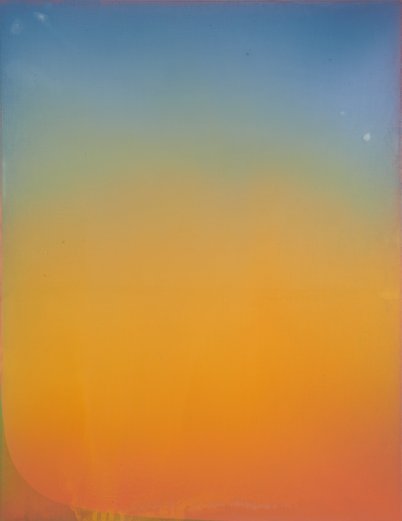 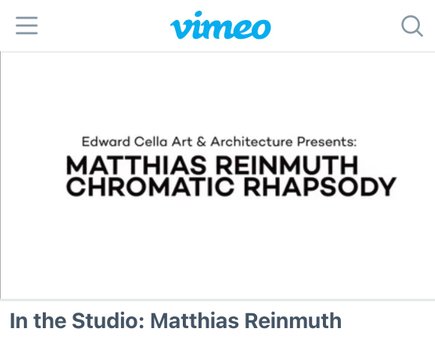 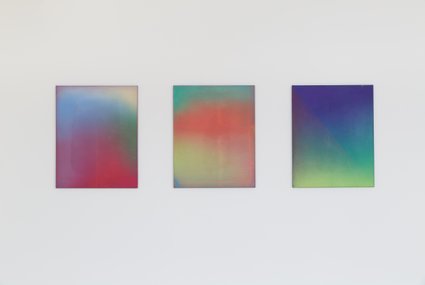 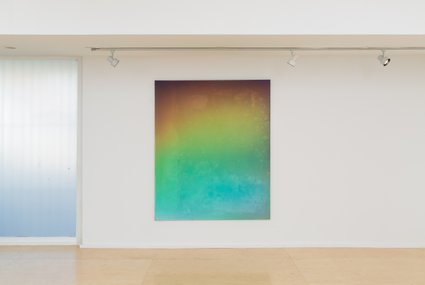 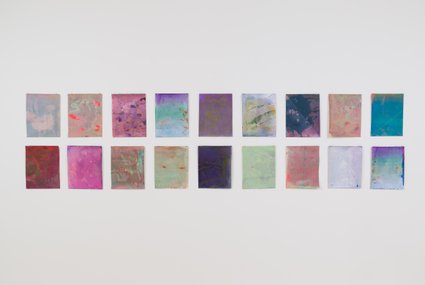 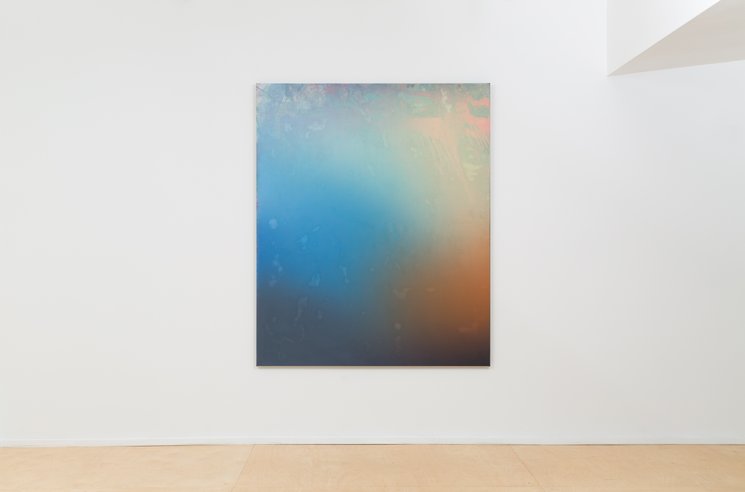 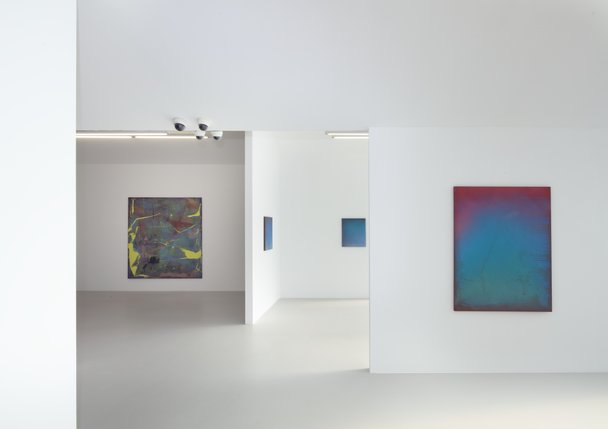 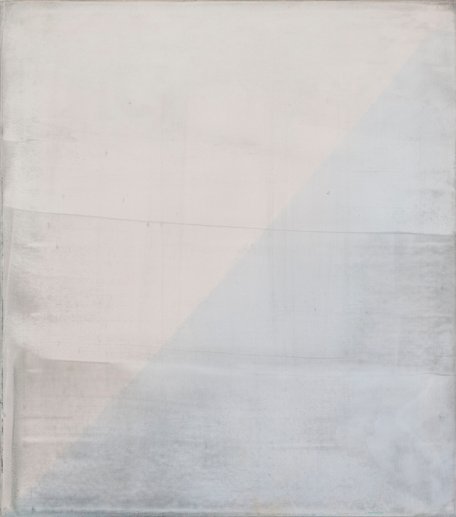 Dear Matthias Reinmuth, it’s so nice to have you and your works here and to have the privilege of immersing
myself in the depths of your colours...
At our first meeting, it was already clear to me that we share many things in common. Apart from my
enthusiasm for your delicate and elegant painting, one of these is our mutual love of globe-trotting – with a
preference for Asia!
You're well familiar with those climes. You know of mouth-watering dishes and of places that evoke a great
sense of longing.
I have to say, for my part, that I feel these sensuous pleasures in your pictures. There also seems to be a
profound yearning for scents, for colours and for nature, for city vistas and landscapes within you.
Tell me, when were you overtaken by the certainty of pursuing an artistic path with all the consequences it
entails?

M. R.:
I think my preoccupation with painting and the question of what art is became so essential to me that there
was no turning back when I was 18 or 19. You said it: with all the consequences it entails.

U.S.:
So, it was painting from the start, without any “detours”, for example via sculpture. Colour “possessed you,”
to quote Paul Klee?

M.R:
Yes. I believe that we all have a direct emotional access to colour. It has an immediate presence, cold or
warm, sorrowful or tantalising. For me, it’s much more powerful, much more sensuous than words.

M.R.:
All colours are amazing. At times, some are more amazing than others, but that changes constantly. I don’t
really have a favourite colour. Yellow is a colour that I seldom use as a main player. But it does appear very
frequently as a mixed colour. Yellow makes everything much more vivid, much warmer. In some regions,
however, it’s the most important colour of all and, in China, yellow was traditionally reserved for the
emperor exclusively.
There are also interesting phenomena such as collective favourite colours. In Germany, for example, cars
predominantly have cool, sober paint finishes. Here, they are either white, black, red, metallic silver,
occasionally dark blue. Taxis tend to be beige, but overall, the colours of the cars are very sedate and
restrained.
In South East Asia, the streets are much more colourful, louder!
There, luscious pink, vibrant yellow or green predominate and very often gold, too, when a Buddha is
standing on the roadside.

U.S.:
In some pictures, I see echoes of calligraphy, and of old-master
landscape painting. I see reminiscences of my beloved Claude Monet in the watery dark blue ground of
another painting. Do you feel an affinity with great historical or
more recent painters?

M.R.:
Without wanting to speak for all painters, you always really live and work together with 500 or 600 years of
painting history. They’re always there with you. You know about what’s already been painted and you try to
find your own way within that. There are chapters that you particularly like, which you just can’t do without,
that you’d like to reinterpret in your own way.
In the black and white painting you mentioned, Zero, I was more concerned with finding my own personal
chapter of “paint in motion”. To mark a point where the sensuousness of a red, a blue or a yellow doesn’t
detract from the movement of the paint.
There’s one painting , mission (giverny), which is not directly an interpretation of a Monet
garden picture. But, for fun, I picked out all the shades I could find from a certain painting of his garden by
Monet. I mixed them up in the approximate quantities in which they appear in the painting and then allowed
them to run into one another using my way of painting. Lots of the colours disappeared into barely
distinguishable shades, but I essentially used exactly the same ones as Monet had in his painting.
Sure, Claude Monet is an amazing and important painter.

U.S.:
You suggested that the diptych  reminds you of Monet's all-over paintings at the Orangerie and
the Jeu de Paume in Paris...

M.R:
Monet was the first person to paint a panorama that was free of political narratives, where colour and light
appear as the protagonists in their place. Before, there were only really historical genre scenes representing
particular and specific religious or societal events. In that sense, Monet is a sort of godfather of non-political
narrative art. Now and again, he stands amiably on the sidelines, watching on benevolently.

U.S:
Your exhibition is titled mission. There’s a wordplay hidden in there: The English word “mission”, the German
word “mischen” (mixing) and even the word “vision” spring to mind. You already elucidated the title at the
start of your artist's statement. Do you always have a vision? Is it a different one in each painting or an all

M.R.:
Well, having visions would make you more of a prophet than a painter. But in the sense of an idea or farsightedness,

The first thing that pops up is really an image of something,
before a word or a descriptive action come to the fore. There’s of course also the hunch, I mean an indistinct
notion of something that can’t be described in words, but might be through a picture. What I find even more
interesting in terms of the English word “vision” is the wordplay with its German homonym “wischen”
(wiping). Both mischen and wischen are actions used in painting. In the same way, there’s a vacillation
between the English word “mission” and the German “mischen” − like the colours in the pictures.

U.S.:
What was the idea behind your selection of paintings, which you chose back at the studio following your
visits here?

M.R.:
For the space on the first floor, I wanted to create an environmental situation, a kind of panorama. I’d had
something like that in mind for a while. A colour resonance that interweaves and vibrates and hums.
With the paintings on the second floor, it’s more about how they were arrived at and several different
possibilities of and approaches to dealing with colour, about showing different methods of making a picture,
which led to the way the pictures are right now.

U.S.:
Many of the paintings shown here in fact have their origins on your studio floor.
Since when and why have you engaged in this practice of using the ground you work on as the ground for
your paintings?

M.R.:
I don't explicitly stage the studio floor as the painting ground. The practice has evolved through a variety of
working processes. I lay out the canvas on the studio floor straight from the roll and then, after random
traces have been left during my work on top of them, I stretch them and then begin with the “actual”
painting of a picture. For me, it’s mainly a purely technical, quite pragmatic, process.
Of course, after a period of working, there are sometimes moments when, suddenly, a dramatic incident or a
certain colour resonance on the floor prompt me to immediately mount the canvas onto a stretcher. It’s
about capturing the accidental, which then reverberates as background noise during the painting process.
That’s the interesting thing for me.

U.S.:
During the artist talk traditionally held on the Sunday morning after the opening, someone asked you a
question about the light. The light in the studio no doubt plays an important role for you. Put bluntly, does
your painting orient itself according to the seasons?

M.R.:
Actually, it wasn’t really the four seasons that were being referred to during the talk. I think it was more to do
with the correlation between light and painting. My pictures are predominantly painted in daylight, but their
entire narrative only unfolds with the changes in light incidence from one hour to the next, from morning
until evening.
The situation here at the museum is quite a particular one: a classical white-cube space with artificial light
and without windows to the outside. That’s a challenge for my painting, which lives off the constant slight
changes in the light. Artificial light is always first of all ice cold, even if it's a warm white.

It makes the pictures look more artificial. This actually opens up a link to our contemporary engagement with
images, to our view of the world, which is constantly filtered through digital monitors, through smartphone
screens, which shape our view of the world. After all, the travel photo on the tablet has now become more
important than recounting what we’ve seen.
For most visitors today, a visit to the Louvre means seeing everything through their mobile, simultaneously
documenting the fact of having been there and what they could have seen there. And the same applies to
almost everything. We no longer even look straight ahead when we dare to venture into the “outside world”,
but stagger through the streets like zombies between the Google Maps directions displayed on our
smartphone and the latest pictures on Instagram. Each day, we swipe back and forth between hundreds of
images of the world and, in the evening, we don’t even remember what we’ve seen. Our society is living
within a perpetual digital media background noise.

U.S.:
Dear Matthias Reinmuth, thank you for these insights into your oeuvre, which is also intended as a preview.
I think we’ve again succeeded in getting our senses to vibrate with colour, breaking down barriers and
allowing colours to flow out of the paintings and into our souls. It’s clear to me that it requires courage, great
courage, to accept and allow this sensation. What is required on the part of the viewers is time, peace and
tranquillity, pleasure and energy, as well as contemplation. And it’s you who give us the appropriate
template.

M.R.:
Dear Ulrike Schick, many thanks for the invitation and for offering me the opportunity to hold this exhibition
at your museum. 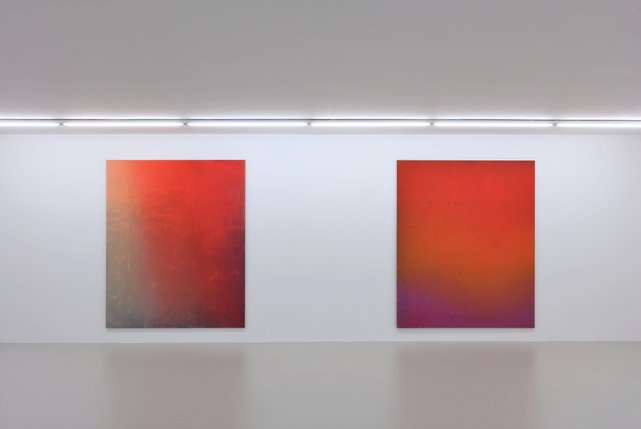